“Bad things only ever happen to me!”

Sound familiar? Whether you consider yourself an unlucky person or not, we can all do with a bit more good luck in our life, and that’s what I’m going to share with you today.

I’ll even give you a free lesson on ranting – the right way to rant, because there is a wrong way.

When I was in my 20s I had a boyfriend who classed himself as unlucky. And in the 3 years we were together he, and we, had some serious bad luck.

Cars breaking down and being impounded. Law suits from neighbours (from the previous owners’ actions). Health issues. Burst water pipes. Keys taken by workmen on moving in day. Being made redundant and jobs falling through. You name it, he – or we – went through it.

I just put it down to him – and us – being unlucky, and I really didn’t think about it any more than that.

When we split up my luck changed for the better. And again I didn’t think about it much.

It wasn’t until over 10 years later when I read a book that changed my whole thinking around luck. And I realised it might have been down to my ex-boyfriend’s actions more than anything else.

That book is The Luck Factor: The Scientific Study of the Lucky Mind by Professor Richard Wiseman. Amongst other things the book shares the beliefs and experiences of lucky and unlucky people.

And it’s fascinating! (I’ve actually just re-read it as it’s such a good book.)

Just to be clear – when I talk about “lucky” people it’s people who class themselves as lucky. The same goes for “unlucky” people.

It would seem that lucky people go through life in a very different way to unlucky people.

One example that sticks out in my mind was this one (and I’m paraphrasing from the book here):

Two people – one lucky and one unlucky – were given the same instructions: go to a specific coffee shop at a certain time. Before each person arrived a crisp £5 note was placed on the ground, right outside the coffee shop. Would either of them notice the money and pick it up?

The lucky person noticed the money, picked it up and continued into the coffee shop as directed.

The unlucky person walked straight over the note and into the coffee shop.

When the unlucky person was asked afterwards if she’d had a lucky or unlucky morning, she said it had been uneventful.

The exact same opportunity but two different reactions and stories.

The lucky person saw the money and picked it up; the unlucky person didn’t even notice it.

How many times have you heard people say things like “As luck would have it”? But is it luck or is it keeping your eyes open and being receptive to good things happening?

As I read this book I started thinking about luck, my life and the life of those close to me.

The biggest example that jumped out at me was the night I met Ben. It was in a bar on a Saturday night. He was there with his brother, I was there with my friend.

When my friend and I arrived we ended up at the same table as Ben and his brother as there were no seats left in the bar. We said “Hello” to each other as we sat down and then continued our separate conversations.

This went on for an hour or two, until my friend needed to go to the toilet. This was back in the days when mobile phones were simple tools for calling and texting so I wasn’t tempted to get my phone out. Instead I turned to these two men at our table and started chatting to them. (Hello the influence of alcohol making me even more sociable than I normally am!)

I ended up chatting to them all night, and at the end of the night Ben asked for my phone number. 6 months later we got engaged!

Is that luck? Or was I just open and receptive to opportunities?

Another example is a friend of mine who was being made redundant. One Saturday evening he went to a party and got chatting to a guy who happened to be looking for someone who fit my friend’s profile exactly. My friend got the job working for the guy at the party and has been happy there ever since.

So much of luck is about being open and receptive.

To what is going on around you – like money on the street. Are your eyes really open and do you see the money (i.e. the good fortune), or are you rushing around half-blind, missing what’s right in front of you?

Do you chat to people when you’re in a queue or at a party?

Are you closed in on yourself, waiting for the next stroke of bad luck to come your way?

Don’t get me wrong. Shit happens to me too. Just not as often as with those who consider themselves unlucky.

I also react to it as a one-off. My car breaks down? Just one of those things. My computer crashes and I lose what I was working on. Cue lots of swear words but that doesn’t make me an unlucky person.

Something I noticed with my unlucky ex-boyfriend was that he always expected bad luck rather than good luck.

What can you do to stop being unlucky?

Number 1 is read Richard Wiseman’s book. Just to be clear, I don’t get any money or anything in return if you do, but this book was such a game-changer for me. And he says it so much better than I do, so I want to share that love with you 🙂

Be open to what life has to offer you – whether that’s new places, people or food. You don’t know what good luck each new opportunity might bring to you.

Keep your eyes open when you’re out and about – do you see money on the ground? Or posters that might bring about positive changes?

Chat to people when you’re out (i.e. put your phone back in your bag!). Whether that’s waiting for your kids at the school gates, queuing for the toilet in a bar, at your toddler’s playgroup or at a business networking event.

Finally, stop telling yourself you’re an unlucky person. You experience good times and bad times. Don’t let one, two, or even three strikes of bad luck turn you into an “unlucky” person.

Still think you’re unlucky and that it will never change? Then start looking at how you deal with your bad luck. How do you handle the cards that are dealt to you? Start thinking about how you can turn a negative into a positive.

If you want to go a step further, I’ve got a 10 day guide to falling (back) in love with your life. It will help you stop being unlucky and start turning those frowns into smiles 🙂

Amongst other things it will teach you how to rant the right way. Do it right, get it out of your system and go back to being happy again, or do it wrong and be sad and ranty forever 🙁

Now go forth and be lucky! 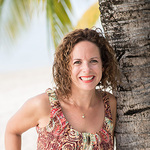 2 comments on “How To Stop Being Unlucky Today”